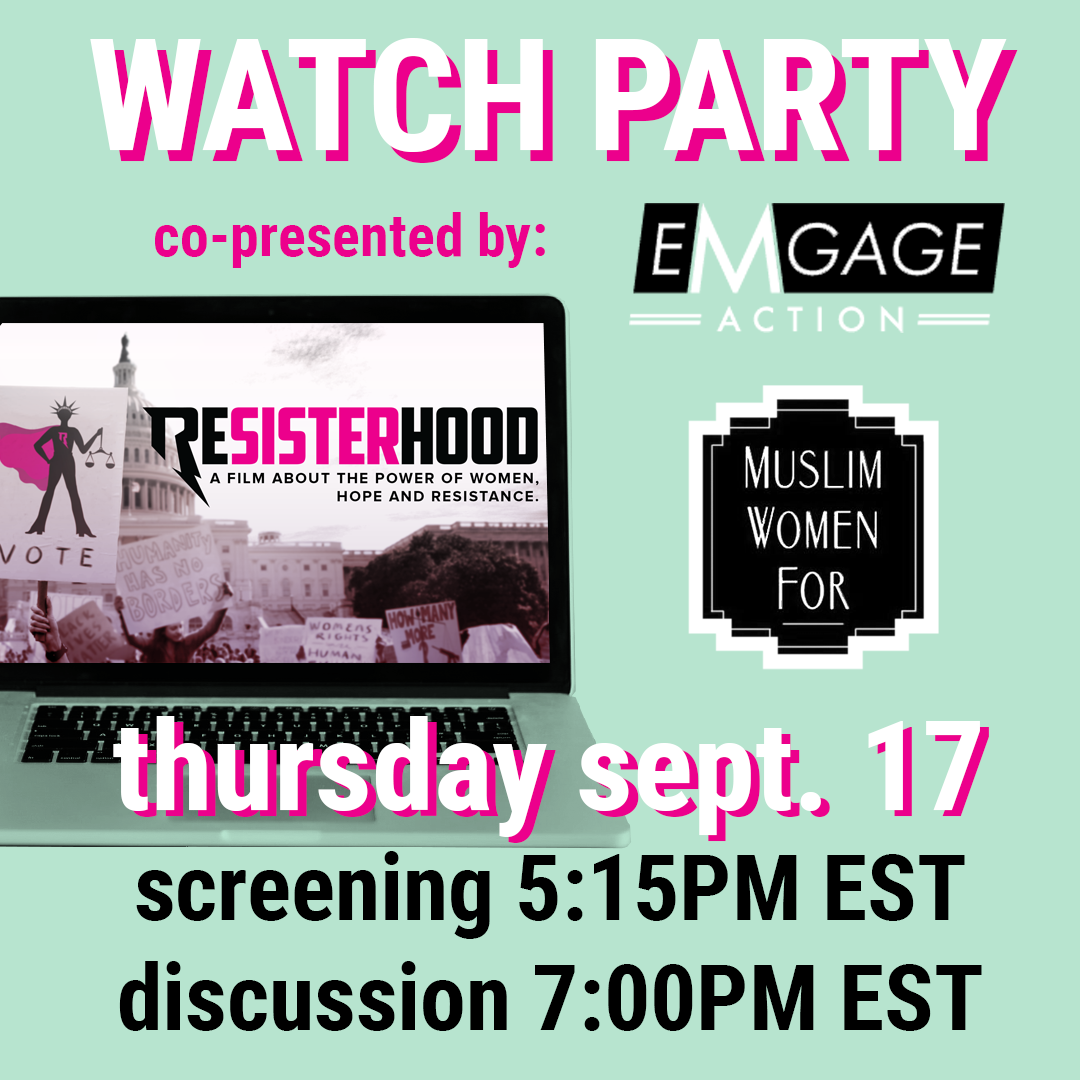 Join us for a free watch party and panel discussion in preparation for National Voter Registration Day! If ever there was a time for an uplifting film about standing up for a more just and inclusive America, it is now. Resisterhood is a documentary about the power of women, hope and resistance in modern American politics. Beginning at the 2017 Women’s March in Washington, DC, the film follows six diverse Americans as they fight for social justice on the streets and in the halls of power. Over the course of two years, experience the reality of Trump’s America through their eyes. And through their actions, witness the strength and courage of ordinary Americans during this extraordinary time.

Watch the film, then join Emgage and Muslim Women For in a discussion about how we can build collective power by getting out the vote on November 3rd! Featuring panelists Mimi Hassanein (Learning Center Management), John Hasan Yildiz (Muslim Women For), Aysha Ahmed (Emgage) and Yvette Lewis (Chair of the Maryland Democratic Party), with an introduction by Resisterhood director Cheryl Jacobs Crim.

RSVP  here and we will email you a Vimeo link to view the film and an invitation to the Zoom webinar for the panel discussion. Start viewing the film at 5:15PM and then join us at 7PM in Zoom for the panel!

ABOUT MUSLIM WOMEN FOR

Muslim Women For is a Muslim women of color-led social justice group that focuses on political education, leadership development, & grassroots organizing as a means of collective liberation. Based out of North Carolina, they are currently focusing on GOTV work, and are planning to turn out 10,000 new Muslim voters across the state to ensure that Muslim communities have a voice come November!

In order to do this, spread awareness of mail-in ballots, and combat voter suppression being carried out by the Trump Administration, Muslim Women For asks you to visit their Tiktok and share their brief 60-second video outlining everything you need to know to vote by mail in 2020. Sharing in community group chats on Whatsapp is recommended! They also have this video available for sharing in Arabic, Bengali, and Turkish.

Resisterhood’s mission is to fire up the resistance and get people out to VOTE. Find out how you can use the film to support your work at www.ResisterhoodDoc.com

There are no upcoming events at this time.